One of our major convictions as a football team is that our punt-block team can make a difference. We call that team the “100s.” It applies pressure on every snap with a 10-man front, but we do not try to block every punt. We just want the threat to be there.

The goal of the “100s” remains the same — block every punt, field goal or extra point. We want players to be fast and quick. We look for linebackers and fullbacks for the four and five positions and secondary types for the one, two and three positions. Our best cover people are the twos.

Ball-hawking, hungry, aggressive players who sell out to block a kick are a must. There is no room for heroes who are just looking for a little playing time.

A mistake or a big play on a punt can mean the difference between a win and loss. It’s considered an honor and a privilege to make the “100s.” DIAGRAM 1: This shows our lineup against a spread formation. Our 10 linemen are set up in three-point stances with their inside hand down and the inside foot back. All of them are shaded on the outside shoulders of the blockers in front of them, and all of them are totally focused on the ball.

The first three steps of the get-off are the most important. Once the ball is snapped, we want them to drive hard with the back foot and split his man’s feet.

The second step is in the outside gap. We call it the “skinny” step. We want them to get perpendicular to the LOS by turning their hips into the gap and facing the center.

The third step is the “through” move, with the rusher clearing the blocker with a swim technique and then accelerating on a straight path to the punter.

Every day we practice punt returns, we go through five drills involving all the coaches. Each one focuses on an assigned group. The more eyes we have on a drill, the better the result.

All the players assume their stances.

When the coach yells “one!” every player takes his first step, splitting his shade’s feet. On “two,” all players take their skinny step into their gap. On “three,” the 10 players swim and clear the blockers. This is repeated five times.

During all steps, coaches check each player for proper technique. Caution: Do not rush the steps. With every player in a proper stance, the center simulates 10 snaps. Starting with L1, the block team goes at full speed through the line, one at a time, using proper technique and blocking a punt kicked by a coach.

If at all possible, the punter/coach should have 10 footballs so that each player can get the feel of a block. We have a manager or another player hand the coach a football after every block. This drill is repeated twice, left to right, then right to left. The two important coaching points for this drill: 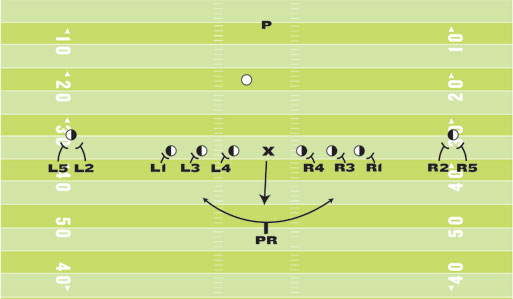 The center simulates one snap and the punt team again stays in its stances and does not block. On ball movement, the “100s” team goes all together with proper technique and blocks a punt kicked by a coach. Once the ball is blocked, we want to scoop and score. Live blocking by the punt team and a full speed rush by the “100s.” There are five live punts. The goal for the drill is to block three out of the five.

During all of these drills, our punter kicks to our main returner on a side field. The latter will fair-catch the first five punt, and then simulate a return with the next five. After those are completed, he alternates fair catch and return.

We show a 10-man front in every punt-return situation. From that 10-man front, we can drop into several different schemes. If we want to set up a return, our call would be “Hold-up.” The front attacks their shade’s outside shoulder and drives him to the center. We want to create a “pile” in the middle.

L5 and R5 drop and help kick out the gunners. The returner attacks the middle of the field after the catch and then darts up the sideline. (See Diagram 3).

The second return is called “bracket hold-up.” For the ones, threes and fours, it’s the same technique as hold-up. They attack the outside shoulder of their shade and create a pile.

The returner’s job is to catch the ball and avoid the first tackler, usually the long snapper, and then attack the sideline. Some of the best battles in practice have come when we isolate the bracket and gunners to see if the gunners can get off of the line and down field. A lot of pride in one’s self comes out in those battles. (See Diagram 4).

From the bracket formation, we have another block call ” bracket-creep-block.” The bracket applies to the fives. They use the same technique as in bracket hold-up. The creep applies to the twos. During the cadence, the twos slowly shuffle toward the center and attack the corner of the LOS and go for the block. The block applies to the ones, threes and fours. They use block techniques to attack the ball. (See Diagram 5).

In short-yardage situations, or if we think a fake is coming, the call would be “115.” The ones and fives drop back (on first sound) to approximately 3 yards from the LOS. The ones play man-to-man with the tight ends, while the fives are keying the up-back playing a LB position. The threes and fours play the hold-up technique. (See DIAGRAM 6).

The last call we use is called “twist,” a two-man game that can be used anywhere along the line. Against a spread-punt formation, our call would be an inside twist. Examples: 154 or 143.

Against a tight-punt formation, our call would be an outside twist. Examples: 121 or 132. The technique used is the same for each call.

Let’s use the example of 154 twist. The second number, 5, tells the fives they must attack the guards instead of swimming the center. They adjust their alignment slightly by moving to the guard/center gap.

The third number, 4, tells the fours that they are the twist. They must adjust their alignment to head-up on the guards and a step back off line of scrimmage. On the snap, the fives kick out the guards, and the fours come off of the five’s hip into the guard/center gap. The threes, twos and ones use the same technique as in the block. (See DIAGRAM 7).