The grass football field at Gardner-Webb University reached what Chuck Burch called a “crisis point,” a moment when changes had to be made for the sake of his student-athletes. Following the 2014 spring sports season, Burch joined other university officials in evaluating the field’s condition, identifying eight or nine spots that were cause for concern. The Bermuda grass held up nicely during the fall, but the winter cold and constant use took its toll by season’s end. That’s when the program started to look at artificial turf.

“We were trying to figure out what’s the best way to take care of the field long term,” said Burch, the vice president for athletics. “The field wasn’t in deplorable shape, but it wasn’t in good shape. We had to step up and address all these areas or we were going to have a real problem on our hands.”

That’s how it starts for many programs that make the leap from natural grass to artificial turf. Schools want to host more teams at their venues, and some are looking for ways to drive down costs of maintenance.

For Gardner-Webb, it was a little of both. Spangler Stadium was about to become home to the university’s first women’s lacrosse team, and the program needed to provide a surface that guaranteed the safety of student-athletes. The stadium was built in 1966, and despite a number of renovations and reconditioning projects over the years, it always included a natural grass field.

When Burch began his research, cost was a significant factor. The university was fortunate in securing some private donations, but the long-term savings had to make sense. Re-sodding the entire stadium would have cost at least $80,000 and that didn’t include maintenance or fertilizer. Turf required less care, which was welcoming news for the lone person responsible for overseeing all of the university’s grounds.

“He does a great job, but he’s just one person and at times gets a little stretched thin,” Burch said. “We started talking about turf and what it would mean as far as minimizing maintenance. It would reduce our concerns about having a lot of different activities on the field because now we were going to be able to withstand everybody out there.”

Gardner-Webb’s Gridiron Turf is a state-of-the-art surface that uses the most durable fiber in the industry, said Gary Wilson, director of sales at Advanced Polymer Technology (APT). APT worked with the university to provide a turf that would not only endure repetitive use but also last longer while delivering a greater level of security against injuries. 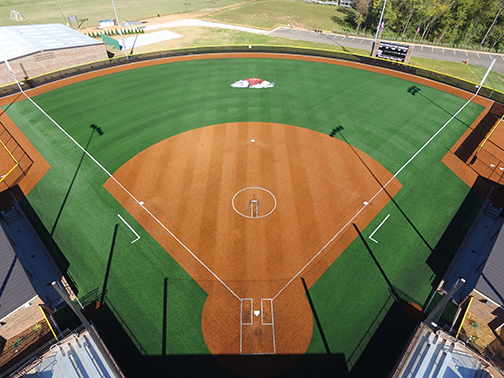 Beneath the surface is an elastic polyurethane shock pad that’s designed for performance and the safety of student-athletes. Wilson said the “E-layer” is incredibly popular with European soccer fields but not many American athletic programs have jumped on board.

“(Gardner-Webb) is above the curve,” Wilson said. “I’ll tell you right now, less than 2 percent of college sports have any kind of shock pad underneath their turf. Nobody wants to pay the money for it, but Gardner-Webb saw the liability is far worse than the cost.”

Burch said the decision to go with turf was made in June, and by the second week of August the field was already hosting a high school jamboree. A few weeks later, Gardner-Webb’s football season kicked off, and the university was given its first look at how the new turf would hold up.

“It was very nice,” Burch said. “Every now and then you may find a seam that needs to be address, but it was great. We worked with our coaches to make sure it was the kind of surface they wanted.”

The new football field was a significant project for the university, but it didn’t stop there. The program also went ahead and installed artificial turf for the softball field and the infield at the baseball stadium, a move that Wilson said is becoming more popular in college and high school athletics.

The decision was partly made in hopes of overcoming inclement weather that cancels or delays baseball and softball games. Burch said February can bring some of North Carolina’s worst winter weather, but the artificial turf stays in playing shape even if there is light snowfall. It also helps that the field doesn’t experience the same wear and tear as grass fields, and local schools have even asked permission to play on the artificial turf when their own fields are in rough shape.

One of the biggest questions surrounding artificial turf and baseball or softball is replicating the normal skips and bounces. Players often expect a learning curve, but manufacturers are able to use sand beneath the turf to create natural motion and speed on ground balls, eliminating any unexpected hops.

“The softball coach told me the kids love sliding on it too, and I thought that was going to be a big difference,” Burch said. “He said the kids have two-hour sliding sessions and they don’t complain about it or come off the field sore or skinned up.”

Burch said the university didn’t have reservations about switching to turf, despite rumblings that the crumb rubber could contain harmful carcinogens. Studies have not found any evidence to support that claim, but the Environmental Protection Agency (EPA) and Centers for Disease Control and Prevention (CDC) are partnering on a new study to determine whether there is cause for concern, and the results are expected to be released by the end of the year.

“Those (issues) came out after the turf was put in,” Burch said. “I got some of that information from our president and read some of the articles. Until there’s something that contradicts what’s out there now, there hasn’t been anything to raise our level of concern.”

The project’s ripple effect has spread across campus and beyond. Burch now feels more comfortable touring recruits through the facilities during the winter months, when the fields look just as pristine as they would in August. A lot of athletic programs might downplay the impact fields or gymnasiums have in luring student-athletes to campus, but Burch believes their influence is real.

“It’s a year-round selling point,” he said. “Our lacrosse team just had a couple kids on campus yesterday, and they talked about how much they liked the field and the stadium. You talk to enough people in college athletics, and that’s the lifeblood of what they’re trying to do — recruit kids that can come and make your program better. We’ve certainly had a positive impact from that perspective.”