Defending The Double Wing Part I 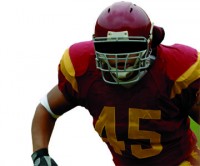 Rules for every player on the defense

How did Markham do it…with an offense he devised that was a modern version of the Double Wing. It’s a highly effective offense featuring two tight ends, one fullback (right behind the quarterback) and two wingbacks…as in 880 points in 14 games effective.

Dick Bruich coached in the same league as Markham, at Kaiser High School in Fontana, Calif., and it didn’t take a nuclear physicist to figure out that if his squad was going to win the league, they were going to have figure out how to stop Markham’s Double Wing offense— and they did.

Of course, Markham’s success with the formation did not go unnoticed, and now there are high schools all over the country running the system, which is difficult to stop for a variety of reasons.

First, it’s not something teams see every week, so preparation is difficult. Second, rather than spreading the field, it tightens it. The linemen play toe-to-toe with no splits and the wingbacks are right off the tight end. But most important, the Double Wing attacks defenses in a unique way.

The Double Wing is designed to do is lure defenders across the line of scrimmage while simultaneously knocking others back to the second level, creating “vertical space” that the running backs take advantage of. So, instead of trying to create holes by pushing defenders apart, the Double Wing is designed to create holes by separating them vertically.

DIAGRAM 1: The Double Wing. The offense almost always begins with motion from one of the wingbacks (started from a snap-count call) and most plays run in the direction of the motion — and though most plays are running plays, the Double Wing also has just enough passing options to keep it from being totally predictable.

So how to stop an offense that can score 880 points in a single season? Bruich created a plan.

There are seven basic plays in the Double Wing and the first order of business is to stop the running game. The passing attack is secondary and works best when the defensive backs are forced to commit to stopping the run. The plays:

There are some other plays in the playbook but defenses that can stop the basic seven should be able to deal with the quarterback counter and most other options.

Rules For The Defensive Line

Bruich and his staff have a set of rules for each group of defenders, starting with the defensive line. These rules apply for both five-man and four-man defensive fronts with only slight modifications — and it’s important to use both in the course of the game. Kaiser is primarily a 5-2 defensive team, and so the squad emphasizes that front, but the Cats shift into a 4-3 or 4-4 on occasion to keep the offense from knowing what is coming.

DIAGRAM 2: The 5-2 Look. In the 5-2, Bruich would like to have the nose slant a bit but it’s hard to get reads on the direction of the motion before it begins, and once the motion starts, things happen quickly. So most of the time, the nose tackle must read and react to the center, who generally blocks away from the play.

1. If it’s man blocking, it means Pitch or X Sweep. The defensive tackle should try to occupy the C-gap but must not go across the line of scrimmage. If he does get sucked into the backfield, then that opens up the vertical space the offense wants.

2. If it’s a double-team from the tight end, it means Power Pitch. The counterintuitive message from Bruich is that the defensive tackle shouldn’t stand up to the double team or try to break through it. Instead, he should, in Bruich’s term, “grab grass” and make a pile at the line of scrimmage. Standing up and getting driven back creates vertical space for the runner to slip through, while just getting down on the ground with the two blockers fills the vertical space with bodies.

3. If the offensive tackle blocks down on the linebacker, it means Fullback Trap. The defensive tackle must not go up the field, because that creates a vertical gap.

In a four-man front, the defensive tackles play against the guards just as they would against the tackles, and read the same keys.

The nose tackle’s responsibilities are much simpler.

• If there’s a double-team, make a pile. Again, grab grass and obstruct the line of scrimmage with a pile of bodies.

• If there’s a down block from either side, don’t go into the backfield. Instead, slide down the line of scrimmage.

First, teams should use four rotating defensive ends against this offense and assign a coach just to watch them. This allows the coach to see what’s going on and talk to the players about their alignment when they’re off the field. It’s critical that positioning and reactions be precise against the Double Wing.

Finally, the defensive ends read the tight ends. There are six reads to understand.

1. If the tight end blocks down, it means Power Pitch or Trap.

3. If the tight end cuts the tackle, the play is going to the opposite side.

For all three of these keys, the defensive end must run to the “box,” which is one yard behind the line of scrimmage, between the guard and tackle. It’s important that the defensive end run to this spot, rather than to the fullback, and that the end stay as close to the line of scrimmage as possible in to limit the vertical space. It would be nice to make a tackle, but as before, the main thing is to create a pile that clogs the running lanes.

The most common mistake is coming in too high and getting driven back, which opens holes. The defensive ends may not make many tackles but creating piles disrupts the play. It also allows the inside linebackers and defensive backs to shut the play down.

4. If the tight end blocks down, the defensive ends try to catch the play from behind. Speedy defensive ends will be able to run down plays from the weak side if they react quickly enough.

5. If there’s a double-team from the tight end and wingback, the defensive end makes a pile.

6. If the wing blocks the defensive end one-on-one, the end gets to the box.

Rules For Inside Linebackers

The inside linebackers in the 5-2 shade outside of the guards and choose one of three keys. None is perfect but each is helpful.

X Keying the fullback. The fullback takes the linebackers to every play but the X Sweep, which begins with a fake to the fullback.

X Keying the quarterback. The play goes to the quarterback’s back (when he turns perpendicular to the line of scrimmage to hand off) except for the Dive and Reverse.

In general, the linebackers must go inside out — they can’t afford to overrun the play.

Rules For Defensive Backs
In the 5-2, Bruich uses a Cover 2 most of the time, with the cornerbacks in a four-by-four alignment — that is, four yards off the line of scrimmage and four yards outside the tight end, just outside the wingback. The corners focus on the wing.

1. If the wing blocks down, the cornerback fills and spills the ball outside.

2. If the wing blocks the cornerback, the play is going outside.

3. If the wing goes out for a pass, the cornerback has the flat zone.

The safeties line up six to eight yards deep, just inside the tight ends. Their two rules are:

1. If his wing goes in motion, the safety has the middle deep third.

2. If his wing stays, he has the deep third on his side.

One thought on “Defending The Double Wing Part I”