The backdoor offense, also known as the “Princeton Offense,” is popular at all levels of competition. The following drills help players learn the intricacies, movements and skills necessary for successfully executing the backdoor offense. DIAGRAM 1: Breakdown drill A. O1 takes a few hard dribbles toward O2. O2 fakes high, makes a backdoor cut and receives the pass from O1 for a layup. The pass must be a bounce pass that leads the player to basket. Make sure players are cutting in a straight line to basket. Run the drill from both sides of the basket. DIAGRAM 2: Breakdown drill B. Position the two groups of players into single lines as shown. The drill is executed in the same manner as drill A, except the group of players who make the cut set up high and cut backdoor. DIAGRAM 3: Breakdown drill C. Run this drill for a few repetitions and then implement defenders into the drill. O1 dribbles hard at O2. O2 accepts the handoff from O1. It’s important that O1 dribble directly at O2’s defender. O2 has three options after securing the handoff (see diagrams 4 and 5). DIAGRAM 6: Breakdown drill D. This drill is run with three players, a point guard (O1), wing player (O3) and high-post player (O5). O1 passes to O3. Then, O1 cuts in and makes a flare cut off a screen set by O5 (O1 must cut hard to create proper screening angle for O5.) O1 can shoot the jumper or drive to the hoop. Run the drill from both sides of the floor. DIAGRAM 7: Breakdown drill E. O1 passes to O3 and makes a flare cut off the screen from O5. O3 passes back to O1, and O1 takes a few hard dribbles toward the basket to draw the defense and then pitches the ball O2 for jump shot. Run this drill from both sides of floor. Note: O5 must work hard at getting into good screening position and angles. 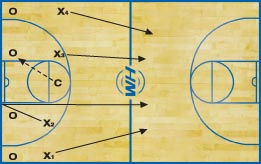