The role of assistant coaches

A characteristic of good athletic programs is that they have great assistant coaches on all levels. Assistants play a vital role in a team’s success.

There were certain qualities I looked for in assistants, and it’s imperative to have a meeting prior to the season to outline expectations. While serving as a head coach, I always remained as an assistant coach in another sport. This may not be something that you want to do, but I believed that being an assistant coach in another sport allowed me to become a better head coach. I also believed that being a head coach allowed me to become a better assistant. It gave me a different perspective of both positions. 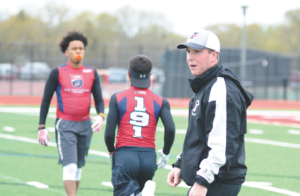 An assistant coach once said at a coaching clinic that his main objective was to make the head coach “Coach of The Year.” That concept had a major impact on me about the role of an assistant.

There are six keys to being a great assistant coach — loyalty, working hard, knowledge of the game, teaching schemes, developing players and sending quality individuals to the next level in the program. Here are some thoughts on each.

Staffs face enough challenges on a daily basis, so head coaches should never have to be concerned with loyalty.

Head coaches are in the spotlight and need full support from their assistants. It was a unique situation for me in that three of my assistants played for me when they were in high school. They knew the system, believed in it and taught it well. I knew I would have no issues with loyalty. I also knew that if they had concerns about the program, they would come to me first and discuss them behind closed doors.

I did once have an assistant coach who was not loyal. During varsity games, he would criticize my coaching and voice his concerns with people in the stands. I was disappointed when the team manager brought it to my attention. I confronted him and, to his credit, he admitted it was true and we talked openly about his and my concerns. I respected his honesty, but not his approach.

He decided to leave the program after one season, a good outcome for the both of us. If you can’t be loyal, you should step aside. It’s not fair to the head coach.

It’s very easy for the players to tell which assistant coaches love the job because they bring enthusiasm every day to practices and games. When players see how hard a coach works with them, they appreciate it and respond in a positive way.

Most players will increase their effort and intensity in practice. Players want to be coached, and players want to improve. The work ethic of an assistant coach is a major factor in the improvement of players and a major reason for the team’s success. No team should ever out work us in practice or games.

Even though I place tremendous emphasis on loyalty and hard work, it’s extremely important for assistant coaches to know the game. Even after 40 years of coaching at the high school level, I continue to read articles, attend clinics, study film, communicate with other coaches and work camps. I encourage assistant coaches to do the same — learning should never stop.

The more you understand the game, the more effective of a teacher you are. Assistants are usually given specific areas of the game to focus on. They should learn as much as they can about that aspect of the game, but at the same time observe other coaches and study different systems of play. Assistants must build their overall knowledge of the game so when the opportunity presents itself, they are prepared to become a head coach.

A top assistant in a successful program is attractive to schools that are looking for a head coach. Quality assistants should have opportunities to apply for head coaching job, so be prepared, build a resume and make sure to understand all the responsibilities that go into being a head coach.

Assistant coaches on the lower levels have to realize that when it comes to offensive and defensive systems, that’s up to the head coach. It makes sense to teach the system of play used at the varsity level in the freshman and sophomore programs.

At times, it’s difficult for underclass coaches because they want to put their stamp on the team. Assistant coaches have to realize it’s not their team, but rather one part of a whole program. When I was a head coach, I made sure that my assistants never lost their jobs because of the win-loss record. Rather, they were evaluated on how well they taught the system.

I detailed for my assistants what I wanted taught and run on the underclass levels. However, if a freshman or sophomore coach wanted to add something because he thought it worked with his players’ abilities, I would usually allow it. Most times assistants have a better understanding of what their players can do. While they can occasionally add wrinkles to the overall system, a good assistant should always check with the head coach first.

I spent 41 years coaching man-to-man defense and continuity offenses at my school. When I moved to another school as its head sophomore coach, it was under a coach that ran zone and a lot of set plays. At first, I was somewhat uncomfortable with this approach, but I studied his system learned it. I taught it the best I could, and by the middle of the season I was extremely comfortable with it.

As an assistant coach, keep an open mind. There are a lot of different ways to play the game, and it’s not what you run as much as how well you run it and teach it that determines success. By teaching a zone defense and a zone press as a primary defense, I was introduced to some great breakdown drills. Not only did I become a better zone coach, but it also helped me a lot in terms of how to attack zones and zone presses.

One of the most satisfying things for a coach is to see how players improve during the season. That occurs because of regular and repetitive fundamental breakdown drills, both offensively and defensively. This is an area were assistant coaches play a major role. On most staffs, assistant coaches work with either post or perimeter players, so it’s important to take advantage of this opportunity. As the players improve, assistants should take great pride in their role in the process.

Here is where head coaches surrender some control. There will be pressure on the assistants that the players perform well in that area of which he or she is responsible for. Good assistants take it very seriously and head coaches will get great results. The teams that I enjoyed most were the ones that improved greatly during the year and played best by the end of the season. This typically occurs because of the tremendous contributions and efforts of assistant coaches.

Prepared for the next level

Head coaches love to see an underclass team give great effort, play as a team and have a tremendous attitude about the game, teammates and their coaches. I had outstanding lower level coaches who always sent me quality players who were coachable. That’s not always an easy task, but it’s essential for assistants to do this. Every assistant who emphasizes character to the players is doing a great service to the head coach.

Head coaches must have great communication with their assistants. Hire good people and make the expectations clear. Assistant coaches know the expectations and perform them to the best of their abilities. Next time you hire a new assistant or work to develop the assistants already in your program, keep these thoughts in mind when helping them become the best they can be.

Donald Kloth coached 43 years of high school basketball and is a member of the Illinois Basketball Coaches Association Hall of Fame. He currently coaches at Warren Township High School in Gurnee, Illinois.