The shallow cross makes the second-level players move and cover ground. Getting the less-mobile, second-level defenders moving in space opens up throwing lanes down the field and forces the defense to defend more area.

While basic shallow-cross concepts can be employed effectively, try expanding the basic structure into a dynamic package.

The basic shallow-cross scheme originates most naturally out of a four-receiver, one-back offensive personnel grouping. DIAGRAM 1: Standard shallow cross. The basic version features two receivers crossing within 10 yards of the line of scrimmage. The X receiver runs a dig route at 14 yards. Z receiver runs an 18-yard post pattern. The six-yard shallow route by the W receiver is usually run into the boundary with the crossing pattern by V up to 10 yards down field.

The back (A) has a check-release spot route at five yards. His protection rule is to check the first exposed gap, inside-out to the call side. The QB’s progression is: shallow (W), dig (X), crosser (V) and spot (A).

The inside receivers must avoid re-routes and need to stay at the proper depths.

It’s also important to teach the QB to see ahead of his crossing routes to avoid a big impact by a defender sitting on the shallow route. Inside receivers must recognize the coverage and accelerate through against a man defense, or sit in windows against a zone, as the defenders clear the tackle box. The first addition to the shallow-cross scheme is to tag the outside receivers with post-corner routes.

DIAGRAM 2: Post-corner & auto-seam adjustment. The inside receivers have the same assignments, but now you attack the flat defenders with a high-low in cover 2 more effectively. DIAGRAM 3: Post corner Vs. hard cover 2. Outside receivers stem inside on their release, push vertical for 10 to 12 yards and run their corner cut off the high safety.

The shallow route by W helps condense some of the LB activity and clears the way for A to hit the seam. With the inside receivers running mirrored post-corner patterns, the seam route by A fills the void in the middle. Utilize a five-man, empty-protection when A is running the auto seam.

For the QB, the adjustments in having post-corner routes being run forces him to adjust his progression slightly. With the post-corner and auto-seam look, start with the progression on the boundary with the high-low read with W and X, then work to A in the seam and V crossing late.

Another adjustment to use with the shallow-cross package is the inclusion of a wheel route.

Normally, V runs a crossing pattern at 10 yards. Rather than running the 10-yard crosser, have V run a wheel route and keep the assignments the same for everyone else. Whenever possible, try to keep concepts and progressions consistent when working within the framework of a specific route structure. Ideally, you want to present the defense with several different looks while keeping new installation of movements to a minimum.

With the addition of the wheel route, you are not necessarily trying to force the wheel, but it does serve as a good complement to the shallow route.

If your W is a quick player who changes direction well and is effective running after the catch, then adding the wheel is perfect. With V running toward the boundary, the linebacker movement is away from the middle of the field, so this expands the reception area for W.

In many cases, your personnel dictates your modes of attack. Recognize your strengths, and fit your schemes and philosophies around your roster.

If you have greater depth at receiver, expand your scheme to include an empty package. The shallow-cross concept easily is adapted to a no-back look. DIAGRAM 5. Empty look. Align in a 3-by-2 formation. The only assignment change comes with the extra receiver (A) running a vertical (or a comeback) route. Against a soft corner, A breaks off the vertical route at 18 yards and runs the comeback.

Against a cover 2, send A vertical along the bottom of the numbers on the field. A must fight to the outside to widen the corner, which reduces the corners ability to impact the crossing route by V, which is coming from the boundary.

The empty version of the shallow cross does not change the QB’s progression. He reads W (shallow), X (dig) and V (cross). Since the spot route has been removed as a potential check-down, the QB can glance to Z going to the post if there is time.

But, your QB must be aware that an empty backfield usually encourages defenses to either bring pressure or drop eight defenders.

You might end up facing some defenses that base their calls strictly around your personnel groups. So, give them a two-back look out of 20 personnel to protect everything and possibly predict what fronts and coverages you are to see. 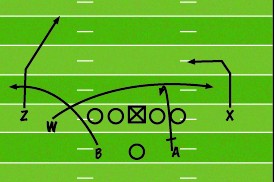 DIAGRAM 6: Two-back version. You have lost V in the crossing pattern, but you still have a high-low concept with a shallow-dig combination. The progression is W (shallow), X (dig), B (flat) and A (spot). It’s important to recognize that you have given the defense a different look personnel-wise and formation-wise, but you havent added a lot to your installation schedule.