We begin every practice with free throws. This is typically a five- to six-minute segment, and after shooting we go into our warmup phase.

We vary our warmups from day to day. The three different warmup routines that we use are defensive stances and footwork; dummy through our half-court offenses; or full-court dribbling drills.

Having some variety in our warmup segment leads to better concentration. In our ball handling drill, we encourage the players to keep their heads up and look at the basket at the other end of the floor. At times, we have a coach under the basket holding up different fingers as players call out what they see.

We segment our ball handling drill into five categories:

DIAGRAM 1: Change-of-direction setup. Every player has a ball, and we have two lines at the baseline with four cones set up on the court. The players execute a change-of-direction dribble at each cone, and once they get to the opposite side of the court, they come back using the same skills.

The change-of-direction moves we practice are the front crossover, between the legs, behind the back, and the spin move.

The “moves on the move” skills we practice are change of pace, stutter move, inside out (fake crossover), double cross, and pullback crossover down and pullback between the legs coming back.

In the speed dribble segment, the players remain in two lines and the cones are removed from the floor. The players dribble the length of the floor three times down and back. The first time they use their dominant hand, the second time their weak hand and the third time they alternate.

The zigzag segment is the standard zigzag drill. The dribbler takes three or four dribbles to the right, then three or four to the left (both at half speed). It’s meant to be a controlled dribble where the ball handler works on different change-of-direction moves but is not trying to beat a defender.

Donald Kloth coached 43 years of high school basketball and is a member of the Illinois Basketball Coaches Association Hall of Fame. He currently coaches at Warren Township High School in Gurnee, Illinois. 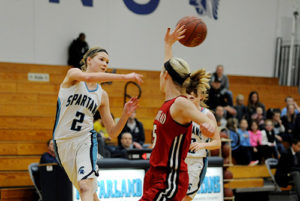