With limited space and no great place for a weight room, Liberty Christian School (Argyle, Texas) had to improvise.

Its middle school, which held classes in nice portables, had some rooms partially cleared out to add weights and other accessories. The decade-old equipment was extremely cramped in the tight space and in turn was not being utilized to its fullest means.

“It was just a bad situation,” said Billy Jordan, the school’s strength and conditioning coach. “We had flat pull-down machines through the ceiling because they wouldn’t fit in there. It was going through actual tiles in the ceiling so we could fit them in there.”

It was a time for a facelift.

Liberty Christian, a college preparatory school northeast of Dallas that competes in the largest private school division in Texas, was ready to invest the time and set aside the funds to a make a dream state-of-the-art facility a reality.

“We’re really in a constant state of marketing because being a private school we’re not within a district, so people have choices, people have options, so we’re constantly showing perspective students around,” said Athletic Director Zack Vest. “We have other things to offer, but at the same time for athletic interests, you want to make sure you have something you can sell and impress people with.”

Since Liberty Christian is not subsidized by the state, the entire weight room project was funded through parent donations.

In June 2012, the school added a 5,000-square-foot weight room for the boys in a brand new building. The following summer, another separate weight room was fully equipped for the girls. Since there are nearly twice as many boys enrolled at Liberty Christian, the girls’ facility is about half size of the boys. “It was very important for us to make sure the boys and girls had the same opportunities,” Vest said.

Along with the new weight rooms came brand new equipment.

With an enrollment of about 500 in high school, about 90 percent of the boys participate in sports, compared to 60 to 70 percent of the girls, Vest said. The weight rooms are also utilized by athletes in grades six to eight.

The staff at Liberty Christian wanted to make sure it stocked both weight rooms at once. It purchased a variety of equipment to meet the needs of student-athletes in all sports.

“We have to think about the 400 kids in middle school, high school, girls and boys, so it’s tough sometimes to take your mind away from just focusing on football or some of your bigger sports,” Jordan said. “But when we’re dealing with all the sports, we’ve got to think about swimming, tennis, soccer. The variety of the machines definitely gives us the opportunity to develop more workout programs for those teams.”

Jordan sat down and compiled a list of what specifically the school needed in its weight rooms.

For the boys’ weight room, Liberty Christian invested in 32 pieces of equipment, along with dumbbells and dumbbell racks. The girls had some equipment embroidered in pink.

Vest wanted to make sure the school bought plenty of full and half racks.

“The driving force behind all the equipment that we looked at is, ‘How many kids can you get in there and how active can you keep them?’” Vest said. “On the boys’ side, we had a little over 14 racks, and that was one of the main things we knew we wanted to get.”

The school also invested in a number of platforms and auxiliary machines, leg and hip presses and squat machines. Jordan said they also made sure to add equipment to aid in rehabilitation and physical therapy.

“It’s bigger and we have more machines,” Jordan said. “We have multiples, so kids don’t have to wait. We’re able to get through a workout.

Liberty Christian is already reaping the benefits of the new facility. With new and improved weight programs for each sport, the school’s teams are performing well in the heat of competition. In the first year after adding the new equipment, the school’s baseball team won the state title and the football team advanced to the state semifinals.

“I think it’s had a huge impact on our athletes,” Jordan said.

Liberty Christian has been recognized for its excellence the last two years. The school won the Class 5A Henderson Cup, an overall school championship award given by the Texas Association of Private and Parochial Schools. It’s presented to the school that earns the most points for performances in athletic, academic, speech, fine arts and one-act play events. As of February, Liberty Christian is the frontrunner for another Henderson Cup.

With a solid track record so far, Jordan and Vest are hoping the equipment can last a good decade before the school needs to look at purchasing new pieces.

“I’ve seen very little wear and tear other than the things you expect to happen,” Vest said. “For the most part over the last three years, things have held together well and if that continues, we hope to use it as long as we can.” Powerline: Developing a strong and powerful base 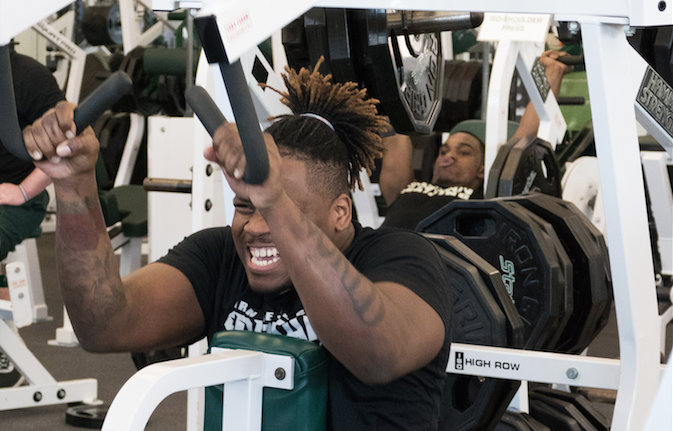