18 characteristics of a good defensive team

Teams that know how to defense well and pressure opposing offenses have these 18 characteristics in common.

1. They recognize their opponent’s offensive actions/tendencies while they’re in the flow of the game.

2. They play defense with their voices, their eyes, their brains, their chests and their feet. 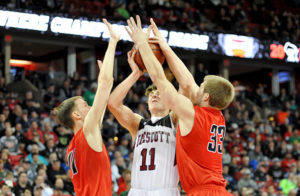 3. They are excellent in their rotations and avoid putting themselves in scramble situations. Rotations are intelligent movements in relation to the offensive players and ball movements, whereas scrambles are panic movements made in reaction to the ball movement, usually after there has been a defensive breakdown. Scrambles are inevitable, but they are diminished by executing proper rotations.

4. They are constantly communicating throughout each possession. They are active listeners as well. This brings about a high level of trust, which leads to a collective confidence.

5. They give “multiple efforts,” making it appear as if there are 10 guys on defense. Examples of  “multiple effort” can be: close out on the ball and then doubling post, or closing out and taking a charge as you help your teammate that has been beaten off the dribble, or hedging on a ball screen and securing the defensive rebound.

6. They finish every stop with a rebound.

7. They defend without fouling.

8. They understand and believe that there is no such thing as “50/50 balls.” They believe that loose balls and errant passes are 100 percent theirs.

9. They execute their coverages/slides based on the scouting report.

10. They take pride in stopping their opponents.

11. They wear down their opponents mentally and physically with their commitment on the defensive end.

12. They force the offense to start farther from the basket than the offensive team wants to or is used to.

13. They keep the ball on one side of the floor. They limit the number of times the ball is reversed, and they know that ball reversals hurt their defenses. They “load” to the ball (midline in college). Loading is a term used to describe the actions of the help-side defenders. Loading also helps to shrink the floor, limiting the operating area for which the offense has to work.

14. They do not allow “paint touches.” They know it hurts their defenses.

15. They are very good in their late shot-clock defense. They are disciplined to complete the stop, and they are calm while communication increases.

16. They don’t give up transition baskets. They understand and execute the four parts of transition defense: Sprint back with their chins on their shoulders; locate and get the ball controlled; communicate to “load” the ball; and run down rebounds.

18. They develop and chart stats that reinforce the most important elements of their defensive philosophy. These stats are talked about constantly with players and visible for the players to see and embrace their importance.

Kevin Sutton was most recently an assistant men’s basketball coach at the University of Pittsburgh. He’s also a member of the Winning Hoops Editorial Advisory Board.