This is a great 5-on-5, half-court drill that teaches players how to move without the ball and pass while under pressure without wasting the dribble. Our team started using this drill during the middle of the season, and it led to a tremendous improvement in our players’ ability to take better care of the basketball — especially during end-of-game situations. 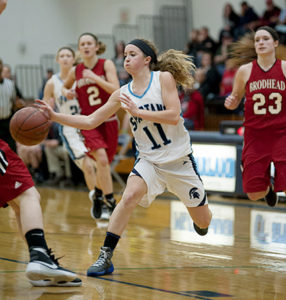 1. The offensive group is the only team that can score. The first team to seven points wins.
2. The offense is not allowed to dribble.
3. You get to play offense only by getting a steal or rebounding a missed shot.
4. A turnover or dribble by any offensive player results in a change of possession.

There are two ways to score:

If the defense deflects the ball out of bounds, the count to seven passes starts over. This encourages players to get into passing lanes as much as possible. When you first start using this drill, allow the team to use the entire space anywhere within the half-court region. As the players become accustomed to the drill, shrink the allotted movement space from the half-court line to the space between the top of the key and the half-court line (often the volleyball line on many gym floors). This “shrunken court” places a greater challenge on the offensive players to cut-and-move without the ball.